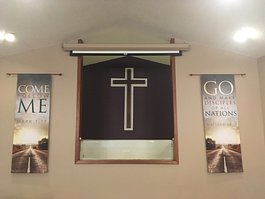 As a member of the Southern Baptist Convention, Life Connection Baptist adheres to the beliefs outlined in the Baptist Faith and Message. We have summarized some key thoughts below, for better understanding, click here, to visit the convention’s website.

GOD:
There is only one living and true God. He is an intelligent, spiritual, and personal Being, the Creator, Redeemer, Preserver, and Ruler of the universe.

THE BIBLE:
The Holy Bible was written by men divinely inspired and is God’s revelation of Himself to man.  It is a perfect treasure of Divine  instruction. It has God for its author, salvation for its end, and truth, without mixture of error, for its matter.

JESUS CHRIST:
Christ is the eternal Son of God. In His incarnation as Jesus Christ He was conceived of the Holy Spirit and born of the Virgin Mary. On the cross He made provision for the redemption of men from sin. He was raised from the dead with a glorified body and ascended into Heaven and is now exalted at the right hand of God where He is the One Mediator, fully God, fully man, in whose Person is effected the reconciliation between God and man.

MAN:
Man is the special creation of God, made in His own image. He created them male and female as the crowning work of His creation. In the beginning, man was innocent of sin and was endowed by His Creator with freedom of choice. By his free choice man sinned against God and brought sin into the human race. God created man in His own image, and in that Christ died for man; therefore, every person of every race possesses full dignity and is worthy of respect and Christian love.

THE CHURCH:
A New Testament church of the Lord Jesus Christ is an autonomous local congregation of baptized believers, associated by covenant of the faith and fellowship in the Gospel; observing the two ordinances of Christ, governed by His laws, exercising the gifts, rights and privileges invested in them by His Word, and seeking to extend the Gospel to the ends of the earth.

THE FAMILY:
God has ordained the family as the foundational institution of human society. It is composed of persons related to one another by marriage, blood, or adoption. Marriage is the uniting of one man and one woman in covenant commitment for a lifetime. It is God’s unique gift to reveal the union between Christ and His church and to provide for the man and the woman the framework for intimate companionship, the channel of sexual expression according to Biblical standards, and the means for procreation of the human race.